Designed in conjunction with the world’s leading radiation physicists and flexible radiation protection vinyl manufacturer it is the lightest weight material to pass all three major certification tests, IEC 61331-3:2014, ASTM F3094-14 and DIN 6857-1 and is the only lead free lightweight material currently certified to those standards.

When viewed outside the apron, Kiarmor is Red on the bottom and consists of bismuth and Blue on the top and consists of antimony. Both elements are well known for their radiation protective qualities, but when combined in this precise process and configuration they form a powerful barrier that virtually eliminates harmful absorbed dose to the physician and technologist.

Lead has long been the standard for radiation protection, simply put it does a great job and it’s relatively inexpensive and plentiful. But, there’s health problems associated with lead and it’s rather heavy so in recent years many companies developed lighter weight reduced lead and lead free products. Generally speaking these materials perform fairly well in the narrow direct beam where they are routinely tested. BUT…..Infab has long been concerned about real world conditions, the ones that doctors, technicians and X-ray personnel are subjected to and that’s not direct beam, it’ s scatter radiation!!

Scatter radiation is the dangerous stuff, it’s the lower energy radiation and it doesn’t pass through your body it’s absorbed into it.

Kiarmor protects every bit as well as pure lead in the direct beam AND passes every single one of the test standards mentioned above BUT it does something better than any other material available in the world today, it drastically reduces the absorbed dose from scatter radiation from 50Kv to 130 Kv, the very type of harmful radiation you are exposed to on a daily basis while you work.

We aren’t talking about a little bit better either. Leeds University tests prove that Kiarmor is 40% more effective than other non lead or reduced lead materials and 20% better than lead materials at stopping the absorbed dose. These were tests performed in real world situations like the ones you face every day and against many different brands and manufacturers of protective aprons. They beat them hands down and by that large of a margin.

While some companies may try to convince you otherwise, the truth of the matter is, if its lighter than KIarmor, it is not properly protecting you. The following chart illustrates weight by mass of Infab protective core material. Any company that tells you their protective material is lighter and still offers the necessary protection is not telling you the truth.

Our extensive research has proven that composite materials, so called “lightweight alternatives” do not meet the new certification standards and in fact would need to be as much as 40% heavier than their current configurations to properly protect you.

Therefore, going forward and to insure your protective aprons meet the highest standards, Infab Corporation will only offer the following core material choices. 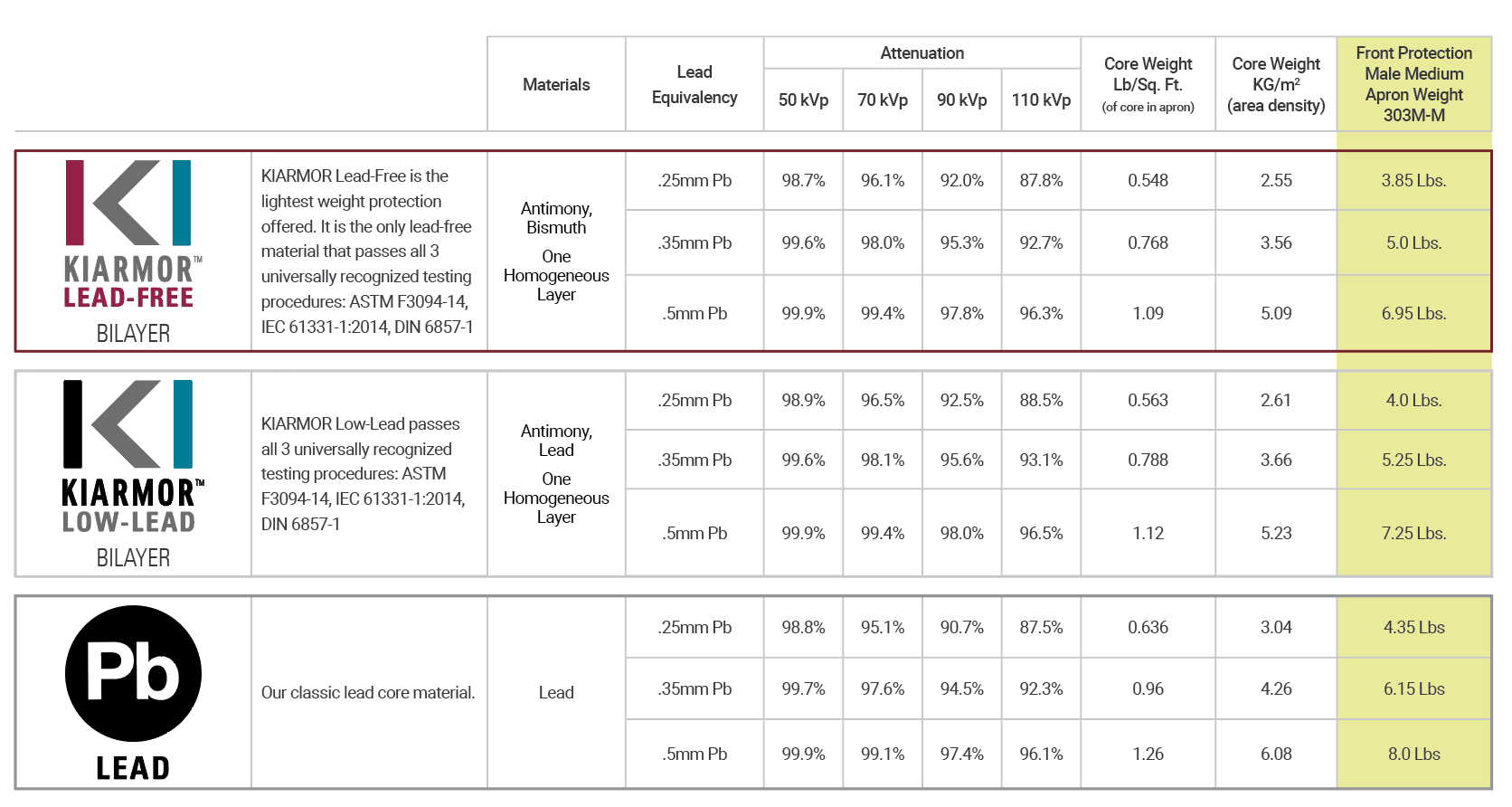 Simply put, There is no other product in the world that is like KIarmor or protects like it does. It is the technically certified lightest weight, highest protection level apron you can buy, anywhere. Do not be fooled by imitators or competitors, ask them for their scientific testing and proof and scrutinize it closely before you make any decision to purchase.